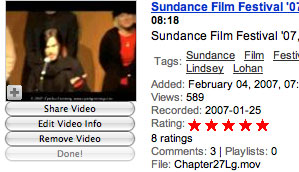 BY PAMELA BOWMAN, MESA, USA — While we were at Sundance, I was sitting in front of a small group of very young filmmakers at a funding panel. After eavesdropping, I learned that they had done a movie on some guy traveling around the United States … I can’t really seem to remember much more about their film. Not real impactful or just not my cup of cocoa. Anyway they ended up being indie snobs. They were talking about a site called YouTube. They said that they would never post there or respect anyone who did. During the panel YouTube was discussed. The panelist acknowledged the impact YouTube was having on the industry and how some people have found success with their ideas and been offered movie contracts because of what they’ve put up on that site.

As you can tell I was not familiar with YouTube. I had heard of it, but I had not frequented the site. I have now. We did a test run on some clips from Sundance and have been surprised by the results. We’ve put up several of the vCasts from the last three years at Sundance. We have been surprised at how popular one vCast is in particular. Jared Leto stars in CHAPTER 27 and the Q&A following the screening of that film has been viewed 589 times in the last 72 hours … since we like the whole independent voice thing, we can see how YoYouTube facilitates our goal of allowing us to hear more voices. Even the ones in our heads!

… BUT, (there is always one or two around)… how can and do people generate a salary to support life as we know it? Is YouTube killing the market for entertainment media? There is a huge population that applauds that thought. People swap music over networks that bypass the artists, producers and distributors. TV viewership is down. People are turning to other forms of entertainment. And in many cases they are in the creative end of providing it for others to watch and enjoy. Granted some of the submissions are worthy of the Maury Povich show or the wrath of Simon, BUT, (the second one), we have the ability to click away anonymously. No chance of hurting someone’s feelings. Pain free! Personally, I think YouTube is cool.

One of the big drawbacks about the computer age is the isolation. Humans do not like isolation. The internet is our creative way to maintain contact with other humans. We get depressed in our anti-social life style and we plug into the net. We chat and email. We watch movies and listen to music. In fact, movies and music are traded on the internet like baseball cards. As a person who develops media content, it seems that what needs to be considered is the contribution and the rights of the creators. How can the concept of free enterprise (commerce) continue if everything created in the entertainment field is almost instantly free?

In the end it really doesn’t matter. The people have spoken. YouTube and other sites like it are here to stay. We will all deal with it. And like all good Americans, we will try to find a way to capitalize on it.