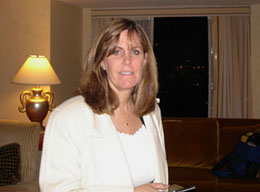 BY PAMELA BOWMAN, MESA, ARIZONA – This weekend I went to my high school class reunion. I stayed in San Francisco in the financial district at The Argent hotel. My kindergarten “boyfriend” is now the general manager. After driving many hours from Phoenix, I walked into my suite to find a chilled beverage, chocolate covered strawberries and a welcoming note. It is the little things that show thoughtfulness and consideration. Or it could be that some boys will do anything to make up for not buying a 6-year-old girl popcorn at the movies?!

I hadn’t seen many of my classmates since we graduated 30 years ago. I recognized my close friends immediately. There were many classmates, however, that I did not recognize. Names were familiar but faces were not. As people came up to me, I would look into their eyes to try to catch a memory or hint of recognition. That is something I tend to do with everyone. It is how I connect. Some people were very guarded and wouldn’t let me in. Others seemed alarmed that I tried to get into their space. I guess, after all these years, they weren’t sure if it was safe. I wanted to scream, “It’s me! Let me in!” Instead, I would just smile and respect their silent retreat.

Now I am back home. Cyndi and I traveled together and so we had many hours to discuss the Zambian films and our goals for our lives and ourselves. Since it takes around twelve hours to drive from Phoenix to the Bay area, we used our travel time to record a few podcasts. I told her the noise from the tires hitting the road was too loud and they wouldn’t be usable but, just like when were in Zambia, she wouldn’t listen to me! I was right, of course. We will have to re-record them. When will that girl learn?

In one of the many discussions, we talked about how we have so many projects to get done and that, at times, we feel paralyzed by the staggering amount of work. Thankfully, the weekend provided a good break and now we are ready to get back to it. Back to looking at a hundred hours of footage for the doc and to further edit the feature. The task seems overwhelming but it has become a passion. It is difficult to separate the telling of the story from the context of everyday events. How can people fully appreciate the efforts of the crew and what we were all able to accomplish under such difficult circumstances? We truly want to convey those heroic efforts without demeaning the gracious people of Zambia and those we grew to love.

As I looked into the eyes of many of the Zambian people–people with whom I had no history, no past, no connection–I was often surprised that they were so open and willing to share their lives and feelings and frustrations with anyone willing to listen. I have come to believe that sometimes that is all it takes to find your own answers–a listening ear or a film capturing one’s words, needs and feelings. It seems that humans need to connect and share as part of growth and expansion. Providing the opportunity for another person to feel safe in expressing their deepest desires is a profound gift. As filmmakers, we tried to do that for the people of Zambia. It’s a little thing, really.

It continues to be the little things we will look for in the footage. It is always the little things that reveal the most powerful moments and tell the most profound story. And, for me, it is always about the people. Gazing into their eyes, hearing the words they spoke and feeling the truths they didn’t need to articulate . I want them to know their words and thoughts found a safe place and were not expressed in vain. I want the world to hear and be touched by their lives, their history and their heritage.

It is the small things. Always the small considerations that speak the loudest and mean the most.