BY PAMELA BOWMAN, MESA, ARIZONA — One afternoon, Cyndi and I let our documentary cinematographer, Robbie, join us for the producer’s meeting. He had his camera with him. He heard our conversation and he recorded some of it. His comment was something like, “I wondered what you guys talked about. It’s fun to hear the inside scoop.” I think he enjoyed the Cyndi and Pam pow wow. Much later in the trip, after a particularly frustrating day, Carlos said, “Man, I can’t believe it. Cyndi and Pam go through this every day.” 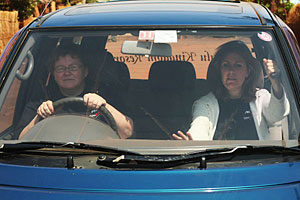 As producers on an enormous project with responsibility for 14 students traveling to another continent, Cyndi and I would discuss every little detail that had occurred throughout the day. I felt honored that she trusted me. Sometimes we vented and sometimes we celebrated. There were only two times I publicly humiliated her. She humiliated me a few times as well. (Pam, SHUT UP!, on camera no less.) It’s hard not to make a few blunders when you’re managing such a huge task in a pressure cooker situation. For the crew, we tried to stay positive and encouraging about everything. Sometimes, the challenges would get to us, too. Mostly we confined our negative comments to the car trips between sets so they wouldn’t know the hard time we were having trying to keep it moving. We learned to trust each other. Being from different lifestyles and yet accepting of each other encouraged a partnership of trust.

We could see crew members behaving similarly with each other. The feature crew became a very tight-knit group because of how much they needed each other’s commitment and support to accomplish their responsibilities. The documentary crew struggled as they were expected to support the feature crew and get great documentary moments. They vented and struggled just as we did.

I know there were times where we both were so frustrated with events and/or each other that we wanted to bolt for the next plane home. Fortunately for the project, instead we would discuss the situation and resolve the issue of the moment. I guess that is called damage control. There were times when I relied on MK and Jeniece to vent my frustrations. I knew they were my roommates and more importantly my friends. They would listen and they knew that my feelings needed to be heard. They also knew once expressed they were allowed to dissipate into the African night. Cyndi knew I shared with them. She knew sometimes I needed others to help me sort out my feelings of frustration. She trusted me and by extension trusted those I had faith in. In doing this we avoided the grudge match. 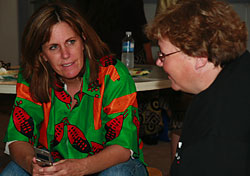 I believe one of the unique qualities of the crew is our ability not to hold grudges. Instead we lightened the load by making it and any situation a joke. Life is too short to hold on to stuff. Conversation and clarifying our opinions helped avoid contention and misunderstandings. Knowing that everyone was committed to the success of the project no matter what encouraged tolerance for each others differences and respect for each other.

The project is still not done. Cyndi and I still continue to have our pow wows. If you read the blog, you see the crew is in the same space. They want to continue working, too. We are in negotiations on how we can keep this momentum going in future projects with this crew. We believe we have something unique to offer the world. If you don’t believe me listen to one of pow wows, but be forewarned, our ambitions are contagious.