BY PAMELA JO BOWMAN, MESA ARIZONA – We have finalized the documentary trailer. We even sent it to the crew and friends for feedback. So far so good. The suggestions for adjustment have been minor. Now we are completing the feature trailer. We will be sending them to HBO. Yes, we are very excited.

As we work, sometimes…, okay, all of the time, we are engaged in conversation. Today we were talking about how people solve their problems. As you can imagine, filmmaking and film editing is just one problem after another. Cyndi told me about a book she read that said people solve their problems in one of five different ways. I can never remember the five ways of solving problems. So, today we made up a word so I could remember them. The word is … Oh heck, I forgot! (Guess what, that is one way of “solving” your problems. Get confused. Get very confused. If you can’t figure it out and don’t know what to do, you don’t have to fix it!) 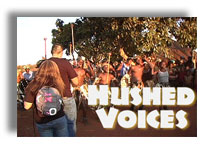 We laughed. (It is particularly funny because Cyndi spent most of January wallowing in some sad place, frustrated with what to do with the films. A little time and distance from the experience … and watching all of the footage from beginning to end as I had originally suggested … made it possible to attack the problem.)

That’s his second book, she says, The People of the Lie. People who refuse to change or handle their problems and blame other people for what doesn’t work in their lives. She always has an answer to everything to support her theories. I think producers are like that. Or teachers, maybe. I am going to put on my headphones so I don’t have to listen to her elaborate on this anymore. Or I’ll be having a problem getting my editing done on time!

So what does this have to do with anything? Not a heck of a lot. Except that filmmaking is a big problem solving fest. And there is the issue of friends and people emailing us and asking why we aren’t blogging like we used to, so I am committed to one of us posting once a week. ( Your turn Cyn!)

I also wanted to tell many of you thanks for your friendship and support these last few months. I had a big problem! Sometimes I got depressed about it. I was definitely sick of it! And often confused as to what to do. We won’t discuss the anger issues. Alec still has remnants of my bite marks! Ultimately, we got busy and solved it … and we feel pretty proud of our documentary trailer. The movies are coming along well, too. Funny how that works. If any of you are interested in viewing the documentary trailer, email us and we might just send it to you. If not, well you choose which of the five methods you’ll use to solve that problem.