PAMELA BOWMAN MESA ARIZONA USA – One sunny noonday while traveling with my daughters to a lunch date, I ran into some road construction. Sitting at a light, I honked my horn gently at the car in front of me to let them know that we had the green arrow to turn. The passenger took offense at my nudge and let me know with just one finger what he thought of me and my considerate reminder. Now tell me what is a mother to do?

As human beings, do we not have the right to communicate our intentions? Could I allow my daughters to think that I would tolerate such disrespect? Well duh, NO! I followed the car through the light and approached them on the right. I rolled my window down and asked, “WHAT IS YOUR PROBLEM?” The passenger flips out his handy dandy switch blade!

I follow blade man just long enough to have my daughter write down the license plate and the make and model of the car. My husband calls to tell me to get off the stupid freeway. Now, let’s get one thing perfectly straight. Freeways are not stupid! I comply and exit the freeway. I report the information to the police. They promise to call if they locate the one finger switch blade man. They never called back. My daughters learned an important lesson that day. Their mother is insane.

My daughters are now 17 and 11. They are beautiful, intelligent and funny. They do not honk at cars, but they do fight injustice in their own way. I am honored to be their mother. I hope they have learned how valuable they are. I hope they know sometimes you have to sacrifice something good for something better and sometimes you just have to sacrifice. I often tell them that life isn’t fair, so, oh well. I also hope they see that I think life is an adventure. I want them to know that I know I don’t know everything, but I am having an awfully good time learning as much as I can. 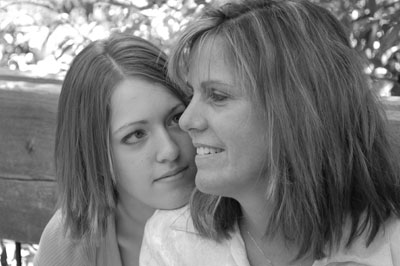 I am going to Africa to shoot a documentary on the first feature film in Zambia. Now just how many daughters are telling that over the water fountain? I can see the first essay at school next year. “We spent the summer learning about Africa because my Mom decided that is where she wanted to go and so that is where she is.”