BY PAMELA BOWMAN, MANHATTAN, USA — She went into teacher mode before we even arrived at the museum. I had to tease her and asked if there would be a quiz at the end of the field trip! She wasn’t sure if I was serious until she saw me trying to hide my smile. 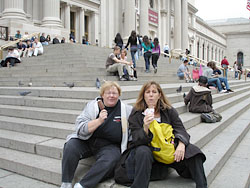 “My apologies. It’s just that I want to suggest how you might want to look at the work as we … blah, blah, blah.” How she rambles!

To sustain ourselves, we bought an ice cream before we entered the museum. Good thing, because I needed that Ben and Jerry! That museum is HUGE!!

We began in the Renaissance area. Now, in all fairness I have taken art history classes. Cyndi calls them “Art in the Dark.” I called it almost flunking my first college course in my senior year! So I am wandering around looking at the artwork that I had studied and I immediately realized that it would have been much more impactful, memorable and understandable for me to have visited the Met for my class. I would have been able to see how artists, their skills and styles evolved through the centuries. It was enlightening to see how (and when) artists discovered how to represent perspective, human form, texture, light and atmosphere.

Sometimes, in seeing the work of these great artists I realized many of their pieces were just practice works or efforts at honing their craft. Each time we entered a new room, I noticed that I would be immediately drawn to a painting or sculpture or mural because I could “read” the story in the eyes of the subject.

The posture of the body, the placement of hand or the attire of the subject would make me see what the artist was trying to evoke. It was amazing and inspiring.

Having my own personal tour guide did not hurt, except my feet! We ended in the Asian wing. I have always loved Japanese art. I am drawn to its simplicity and its complexity. It was a very peaceful and joyous way to end my tour.

And yes there was a full blown verbal test that afternoon. As we walked down Central Park East and through the streets of New York, we discussed artists, movements, color and light. The discussion continues as we apply the work and knowledge of those artists to our current film project. Ever notice how sfumato and chiaroscuro in film is as powerful as it is in painting? Now, how …